Boris Johnson learnt about the Conservative party’s crushing defeats in two UK parliamentary by-elections some 4,000 miles away, at the Commonwealth heads of government summit in Rwanda.

Britain’s prime minister reviewed the Tories’ losses in Wakefield in West Yorkshire and Tiverton and Honiton in Devon in the early hours of Friday at his hotel in Kigali. It was extremely painful for him and his party.

Johnson won an 80-seat House of Commons majority at the 2019 general election by wooing prosperous middle class voters alongside pro-Brexit blue-collar workers, but the by-election results suggested this coalition could be unravelling.

Labour, by winning Wakefield, showed signs of being able to retake so-called “red wall” constituencies in northern England and the Midlands that the Conservatives seized in 2019.

Meanwhile, the Liberal Democrats, by taking Tiverton and Honiton, demonstrated their ability to secure former Conservative strongholds in the south.

The by-election losses were compounded by the shock departure of Oliver Dowden, Conservative party chair. Dowden, who pointedly declared his loyalty to the party but not Johnson, said in his resignation letter: “We cannot carry on with business as usual.”

Speaking to the media on Friday after a morning swim, Johnson tried his best to put a brave face on events. He suggested the by-election results were linked to the cost of living crisis rather than his conduct in the partygate scandal.

“I don’t want to minimise the importance of what voters are saying, but it is also true that in midterms governments postwar lose elections,” he said. “We are facing pressures on the cost of living . . . spikes in fuel prices, energy costs, food costs, that is hitting people. We have to recognise that there is more that we have got to do.”

The prime minister has insisted he will not cancel his visit to Rwanda, nor his attendance at two other international summits next week. It would be an “abdication of responsibility” not to attend a G7 meeting in Germany and “ridiculous” not to go on to a Nato summit in Spain, said one Johnson ally.

But the prime minister will be aware of the dangers of being out of the country at a time of political turbulence at home. Margaret Thatcher was at a summit in Paris in 1990 when the then prime minister learnt her leadership of the Conservative party was in jeopardy.

Johnson this month won a no-confidence vote in his leadership, but 41 per cent of Tory MPs refused to back him, highlighting how the partygate scandal has weakened his authority.

In April he became the first serving British prime minister to be found to have committed a criminal offence after police fined him for attending a birthday party in Downing Street during a Covid-19 lockdown.

Under Tory rules, Johnson cannot face another no-confidence vote for a year, but the grandees on the 1922 committee of backbench Conservative MPs are free to overhaul the arrangements if they want to.

Sir Geoffrey Clifton-Brown, the 1922 committee treasurer, refused to be drawn on whether the rules would be amended.

He told the BBC he expected Johnson would be speaking to Conservative MPs in the coming days about the by-election results. “We will then in the parliamentary party have to make a judgment as to whether we think that is a satisfactory explanation or whether we should actually take steps to have a new prime minister,” added Clifton-Brown.

Whether or not Johnson faces another no-confidence vote anytime soon, the by-election results were grim reading for the prime minister and his aides.

The loss of Wakefield might at first glance seem like the lesser of the two defeats: the West Yorkshire constituency had until 2019 been in Labour hands for nearly 90 years.

Labour secured a comfortable majority of 4,925, in the party’s first by-election gain from the Tories in 10 years.

Sir Keir Starmer, Labour leader, has sought to pull his party back to the centre ground after its hard left lunge under his predecessor Jeremy Corbyn and big defeat at the 2019 election.

But it was the by-election result in Tiverton and Honiton that is likely to give Conservative strategists sleepless nights.

The Lib Dems converted a Tory majority of 24,239 into one of 6,144 for their party. It was the largest majority to ever be overturned in a by-election in terms of votes.

“Yes this is a by-election, and usual by-election rules apply, but 290-odd Conservative MPs have a seat less secure than Tiverton and Honiton,” said Chris Hopkins from Savanta ComRes, the polling company. 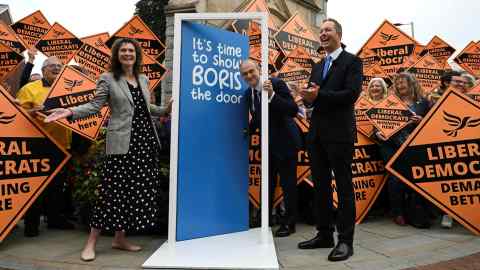 The Lib Dem victory in Devon will send shudders through Tory MPs across southern England, even though some will attempt to dismiss the result as a midterm protest vote, because it is the third such by-election upset in a row.

In June last year the Lib Dems overturned a 16,223 Tory majority to seize Chesham and Amersham in Buckinghamshire. Then in December they won in North Shropshire, wiping out a 22,949 Conservative majority.

Sir Ed Davey, Lib Dem leader said: “The message from Tiverton and Honiton, the people here in Devon, is that Boris Johnson must go. I think they’ve spoken for the whole of the British people and it really is time he left.”