Xavier Bertrand, the centre-right leader who saw off a predicted far-right challenge to be re-elected in the northern region of Hauts-de-France, lost no time in reaffirming his ambition to stand against Macron and Le Pen in next year’s presidential elections.

“This result gives me the strength to go and seek the support of all the French,” he said in Saint-Quentin. Recalling his previous regional victory in 2015, he said: “History will relate that twice here in the territory of Hauts-de-France the Front National [the old name for the RN] has been stopped and we have pushed them back.”

In an election marked by a record low turnout of an estimated 35 per cent in the second round, French voters re-elected the incumbent regional governments run by centre-right and Socialist politicians whose parties were crushed at the national level by Macron and his party in the 2017 presidential and legislative elections.

“Tonight the extremes have retreated a long way in our region because we leave them no space to operate,” said Laurent Wauquiez of the centre-right Les Républicains, comfortably re-elected in Auvergne-Rhône-Alpes in the south-east.

Regional governments have limited powers, mainly over transport policy and education, but politicians of the established parties said the results of the regional votes had given them new hope and undermined the notion that next year’s French presidential race would inevitably be a two-way fight between Macron in the centre and Le Pen on the far right.

Macron is expected to try to revive his party — which propelled him into the Elysée Palace four years ago on the back of a slogan that his movement was “neither right nor left” but which never established a strong presence in local politics — and is also likely to announce a government reshuffle in the weeks ahead, according to senior officials.

The Socialists and their allies, most of whom performed poorly against Macron’s and Le Pen’s parties in the European elections in 2019, will draw comfort from the results of an election that confirmed their hold on regions such as Brittany in the west and Occitanie in the south.

French voters, however, now lean heavily to the right in national elections, and politicians who spoke in their regions after hearing the initial results repeatedly emphasised their attention to issues such as law and order. 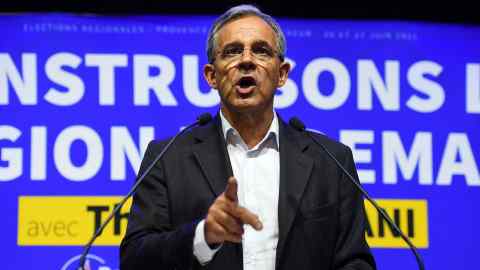 It was the centre-right LR, a political family that has provided most French presidents in Charles de Gaulle’s Fifth Republic, that emerged strongest from the regional election, although to win against Macron and Le Pen it will probably need to unite around a single candidate.

Bertrand, Wauquiez and Valérie Pécresse, re-elected as president of the Ile-de-France region around Paris, all have ambitions to replace Macron as French president next year.

Marine Le Pen’s RN had hoped to win at least the southern region of Provence-Alpes-Côte-d’Azur, but in the end the centre-right candidate Renaud Muselier won by 57 per cent against 43 for the RN’s Thierry Mariani, according to early estimates of the result based on exit polls. A Green candidate had withdrawn from the second round and threw the weight of his Green-left alliance behind Muselier to keep the extreme right from power.