Espionage activity in Switzerland is “booming” as Russian agents increase their presence in the neutral country after a wave of expulsions from neighbouring European states, spy chiefs in Bern have warned.

Switzerland is an outlier in western Europe in so far having not expelled any diplomats or agents in connection with Russia’s invasion of Ukraine.

The number of Russian intelligence officers in the country is “particularly high”, the Bern-based FIS said: “[We] estimate that there are several dozen officers working at the Russian diplomatic and consular missions in Geneva.”

The FIS — which is highly regarded for its counter-intelligence work by larger European peers — has previously assessed that more than a quarter of Russian diplomats working in Switzerland are intelligence agents.

Geneva is a particularly attractive hub, the FIS said, because of the large number of international organisations such as the UN based in the city and its proximity to the French border, allowing foreign agents to cross, unchecked, into European territory from Switzerland.

The city provides the “ideal operating environment” for spies, the report added.

The FIS said “many” of the agents based in Geneva are covert source handlers — individuals trained to recruit, exploit and manipulate targets working in organisations of interest in order to glean sensitive information from them.

Each handler typically works with between three and five covert sources, the FIS said, adding that it believed it had “often” been able to identify and monitor source recruitment on Swiss territory by foreign agents.

In 2019, work by the open-source investigative website Bellingcat identified Geneva as the likely operational hub of the Russian military intelligence (GRU) operatives responsible for the attempted assassination of Sergei Skripal, the former Russian spy, in Britain in 2018.

GRU operatives based in the city have also been linked with attempts to hack into the internal systems of the Organisation for the Prohibition of Chemical Weapons and the World Anti-Doping Agency, a sports body. 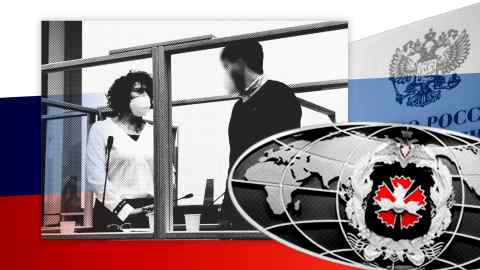 The FIS predicted that “intensifying competition between superpowers” meant that spying on Swiss soil would continue to rise. Russia is one of the agency’s main focuses, particularly as Moscow tries to rebuild its intelligence-gathering capability in Europe.

In response to the invasion of Ukraine launched by President Vladimir Putin in February, European states have collectively expelled hundreds of undercover Russian agents, dealing serious damage to the Kremlin’s spycraft in the west.

Switzerland must “[utilise] to the full” all the legal instruments it can to prevent the country becoming even more of an attractive haven for Russian agents as a result, the FIS warned.